You gotta get it when the going's good!

Last week I was conversing with my cousin – likely about my at-a-standstill writer-teacher life – when she made a comment that took me back to the near-beginning of my writing career.

“You gotta get it while the going's good,” she advised. “Because you never know when your chance will come back around.”

The point resonated even deeper a few days later when I read about author, writer, and relationships and life coach Demetria Lucas D'Oyley's first appearance on the Today Show. She recalled how she happened to be watching a live-stream conference that same day of another entrepreneur, who also appeared on Today, and he discussed the significance of that experience.

“...everyone doesn't get to the Today Show,” he said. “It's a huge opportunity, and you have about six weeks to capitalize on it.”

He and my cousin are both right, though.


In 2013, I pitched a story about how comfortable others were with pointing out how skinny I was – as if I were oblivious to the fact that I stood 5'11'' and wore a size 2 4 – and they seriously scrutinized how much I ate and criticized my occasional mile walk around my apartment complex.

The story was picked up and reprinted on another site that I really wanted to write for, so I pitched a separate story on my failed journey from relaxed hair to natural hair and back again to the second publication. That pitch was accepted also.

Around midnight, a day after it went live, I read a tweet posted by The Root that simply read along the lines of “not everyone can go natural.”

My immediate thought was Ahh shiiiit! In a good way. Well, kinda, because I knew the topic was a sensitive – oftentimes, heated – one. But, I knew it was about me. That personal essay went "viral," and those two stories combined increased my Twitter following so quickly that I had to turn off my email notifications! 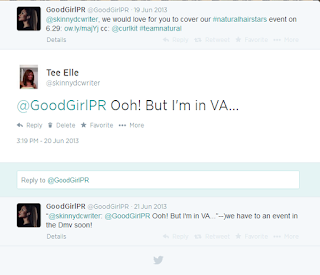 A few weeks after the “Back to my Roots” piece, I got an offer to cover a natural hair event in New York City. I remember joking with my friends that this must be a set up because they know I now got a perm!*

Then I thought, “New Yawk City!” in that voice from the hot sauce commercial.**

I relished the idea of playing TV host on a red carpet. If only I had the means to travel to NYC. Or maybe the client can pay my travel expenses from VA to NY!

But there immediately came another awesome opportunity that didn't require me to spend money I didn't have or leave home.

I received a tweet from someone at Huffington Post Live asking if I wanted to
join a segment on skinny shaming the following evening. Huff Post Live is a popular video-streamed talk show-like forum on community-driven topics run by The Huffington Post. I'd answer questions and add commentary via a webcam.

And this should've been the part when I say, “And my career took off.”

But I was offline – no cell phone, no internet – for several days. By the time I saw the tweet, the program had aired, most likely on another topic since I was MIA.

And so here is where my 3-month-old writing career kinda sizzled, crashed, and burned instead. I missed out. Twice.

At least not personal essays.

With no definite idea of when I'll regain that momentum.

“It could be another 15 years,” my cousin warned as she continued with her advice.

The devil is a liar, as would be her response to any negative declaration.

I'm not waiting 15 years to relaunch my career. Right now is one of those times I believe in do-overs.

I periodically scope my social media follows and friendships and college alum connections, and I spy, through my laptop-fatigued eyes, prominent writers and magazine editors. From fancy glossies, at that!

In retrospect, I wasn't ready to reap any rewards two years ago. (I promise you, alliteration was not my intent in that sentence.) I mean, I didn't even know what to expect as a published writer. I never really thought to myself, People are really gonna read your stories, offer you jobs, and invite you to interview and host gigs!

It never dawned on me until much later that the more I got my face and name out there, the sooner I may graduate from pitching to editors to snagging assignments from editors. Or that if I fall back, folks are going to forget all about me and my two pieces of humor!

So now I'm back, starting from scratch, on my pitching and blogging grind because I have both a base audience that matters and the thorough understanding that one ordinary accomplishment can actually lead to extraordinary opportunities.

But only if you're available to accept them and wise enough to multiply them.

*To clear up any confusion, we sometimes use the terms “perm” and “relaxer” interchangeably, although, technically, relaxers straighten and perms tightly curl.
**That was a Texas Pete commercial, right?

Email ThisBlogThis!Share to TwitterShare to FacebookShare to Pinterest
Labels: blogging, the life, writing