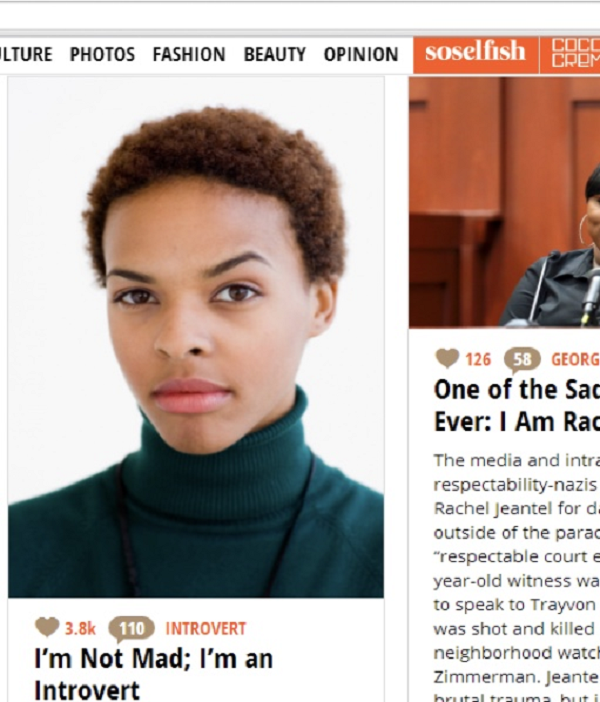 Near the end of my last two jobs, I pretty much disliked the positions and some of the people. But I especially hated those mandatory team-building exercises that involved role-play and meetings that required active participation. Lunch was the best part of those days until I was forced to participate in that, too.

“Why are you so quiet, Teronda?”

I hate that, too, by the way. I wasn't exactly ignoring anyone. I flashed a periodic smile and added an occasional “Oh” to indicate I was listening. But I didn't have anything new or insightful to say to such light chitchat. All I really wanted to do was eat my pepperoni pizza slices in silence so I could regain enough mental energy to make it through the afternoon without a panic attack.

I'm just wired like that. I'm an introvert and I'm not here for small talk.


My words are deliberate and rehearsed. Small talk is too impromptu but deep conversations are greatly appreciated.

Between one-third to one-half of Americans are introverts but many of us pretend to be extroverts in an attempt to escape the anti-social, depressed, mute, standoffish, inhuman, flawed, moody, mad and indifferent labels. Unfortunately we're not actresses who can remain in character for 10-hour days. Suppressing our introversion is a second job and eventually it seeps out like a soon-to-erupt volcano. Sitting amidst nonstop noise one minute too long can be mentally exhausting, overstimulating and possibly detrimental to extroverts if they continue to push us.

I rolled my eyes every time I spotted a team of colleagues prancing toward my desk with their notebooks of three-part questions and you-are-gonna-help-me-now attitudes on figures I didn't even calculate. Things got real, real quick when my coworkers hovered over my shoulder watching me open files and touching my computer screen launching into another series of probing questions.

I had an immediate answer alright: Back the hell up because you've just invaded my personal space. Better yet, open the files at your own desks, type your questions and e-mail me. I'm fluent in passive communication and writing anyway.

We're reserved, soft-spoken, innovative thinkers who refuel and thrive in solitude within quiet environments like closed offices or our homes. In these spaces we pen our novels, compose our music and paint masterpieces. Low-walled cubicles, open work spaces and even nightclubs are to an introvert what tight elevators are to a claustrophobic. Or what solitary confinement is to an extrovert.

I recuperated from the daily firing squads immediately after work in my car with no music and again in my apartment with novels, magazines, logic problems, crossword puzzles, naps and/or a lightly-scented candle. More than likely if we're an introvert, we're a nerd, too.

I wore an invisible “Do Not Disturb” sign. Don't wave at me. Don't honk your horn. In fact, don't even look at me because I won't see you. Don't knock on my door. And don't call me, either.

My phone still rang for evening chatter before I even had a chance to recharge, though. “Why don't you ever answer your phone?” most asked. Because I couldn't eat my pizza in peace like I needed. But I never bothered to explain in detail any deliberate send-to-voicemails because that led to hurt feelings and confrontation. And I'm not here for that, either.

Don't get me wrong, though. I'm rather friendly. I laugh and joke daily, throw cocktail parties periodically and plan weekend outings. (All within spaces I can somewhat control, it seems.) And when my friends need me, I perform cartwheels followed by full splits to show my support.

I'm also down for being social publicly. I do love to go out and eat and sip, watch a movie, play or comedy show or chill at a lounge or any other gathering just like an extrovert. But it'll be short-lived like Cinderella's presence at the ball. Please just don't make a big fuss when introversion rolls up, taps me on the shoulder and tells me it's time to go home.

This essay was originally published on Clutch Magazine online.
Posted by Teronda at 4:32 PM